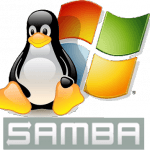 Mounting storage drives on Debian can mean several things. Sometimes you have a NAS system like a Synology or QNAP that has samba shares that you wish to access on Debian. You can do that by mounting the samba share in a folder on Debian. Alternatively you can mount hard drives on Debian that are formatted in NTFS. This guide will cover mounting drives for your HTPC home media server: samba shares on windows machines and local NTFS formatted hard drives connected via usb or SATA to your box running Debian Wheezy, Jessie or later.

This is for mounting a network drive samba share. This can be a drive or folder shared on a Windows machine you want to access from Debian.

Create the mount point, in linux you create a folder that you want to act as a symbolic link for the network drive

First make sure cifs-utils is installed

Fire up WInSCP, browse to and open /etc/fstab and add the following line making sure the uid and gid matches the output of id -u

Make sure you have ntfs-3g installed

Now determine the sda path of the usb drive.

Change the ownership of the mount path

Mount the drive, sdc1 should be replaced with the sdx you found when you plugged in the drive

Now you can make it automount on boot

Fire up WinSCP, browse to and open /etc/fstab and add the following line

If on reboot the drive fails to mount it may be because linux assigned it a different letter when it was plugged in.

Since you will probably be keeping this drive plugged in at boot, you can go to the /dev folder and find how linux is assigning it

You will get a screen like this. sda is used for the primary hard drive so look for the first sdb or sdc that is unassigned. Here it is sdb1. 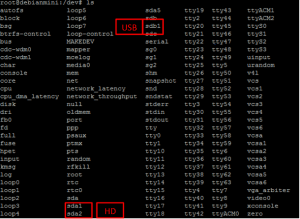 Go back and edit /etc/fstab and change the sdx1 to the correct identifier you just found.