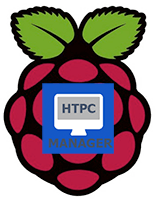 HTPC Manager finally supports Sonarr, SickRage and Headphones thanks to Hellowlol. HTPC Manager adds that extra feeling of excellence to your Raspberry Pi Media Server. You get a slick, modular HTPC interface so you can manage all of your software and services on your HTPC. Services you can manage include Plex, Kodi XBMC, Sonarr, Sabnzbd, NZBGet, uTorrent, Transmission, SickBeard, CouchPotato and more. You will see nice overviews of recently added shows or movies, suggestions for other movies and TV shows. You can even add movies or shows from the HTPC Manager interface. This guide was tested on Minibian for the Raspberry Pi 2 but should work on the Banana Pi, Orange Pi, Hummingboard, Cubieboard and ODROID devices too.

If you are trying to figure out which hardware would work best for you, consider reading the Pi benchmarks.

This is a screenshot of the computer stats from within HTPC Manager from a friend's Windows server, it will be similar on the Raspberry Pi

Install psutil so you can get computer stats as well

Take ownership of the HTPCManager installation directory with your pi user

Try and start HTPC Manager on the Raspberry Pi

You may see a cherrpy error, everything still works though so don't worry.

Edit the htpcmanager init.d script to match the path of HTPC Manager

Change APP_PATH to match the path we installed HTPC Manager to

Update the init.d script to start at boot

You are all set to configure HTPC Manager, you will need some API keys and enable WebUIs in some of the services you wish to manage.

Access HTPC Manager on your Raspberry Pi at http://ip.address:8085